Aim: Intraosseous (IO)-access plays an alternative route during resuscitation. Our study was performed to in-

Results: Estimated success rate was 61.1% (95%CI:39.7%–78.9%) for the Butterfly needle, 43.0% (95%CI:23.4%–65.0%) for hand-twisted EZ-IO® screwing and 39.7% (95%CI:24.1–57.7%) for the semi-auto- matic drill (Arrow®EZ-IO®), all referring to an average diameter of the corticalis of 1.2 mm. The odds of a correct position were 2.4 times higher (95%CI:0.8–7.6) when using the Butterfly needle than with the drill. In contrast, the odds of correct positioning when inserting the needle by hand were not significantly different from using the drill (odds ratio 1.1, 95%CI: 0.4–3.3). Neither of these effects nor the diameter of the corticalis with an odds ratio near one were significant in the model. Median diameter of the bone marrow cavity was 4.0 mm [IQR 3.3–4.7].Conclusion: Intraosseous access for premature and neonatal infants could be best achieved by using a manually twisted Butterfly needle.

In the emergency setting, rapid vascular access is recommended for drug and fluid administration. Peripheral venous cannulation can be difficult or impossible in children, especially newborns, as success rates are significantly associated with patient age [1]. Therefore, intraoss- eous (IO)-access is used as an alternative route if intra-venous access has failed and medication for resuscitation must be given immediately. Resuscitation in pre- and term newborns is problematic due to the fragility and small size of peripheral venous vessels. According to the European Resuscitation Council Guidelines 2015 [2] drugs are best given via a centrally positioned umbilical venous catheter. IO-access is sometimes performed in serious cases independently of umbilical

catheterisation [3]. Circumstances in which intraosseous access may be preferred over umbilical venous catheterization remain unclear [4–6]. Complications (e.g. compartment syndrome, dislodgement, dys- function, needle break, fracture etc.) of intraosseous access in neonates and infants are often serious and well described [7–10] and it is evi- dent, that complication, as well as unsuccessful placement rate, will proportionally arise in younger patients [11]. Intraosseous access can be performed via a battery-powered semi-automatic drill (Arrow®EZ- IO®) or using alternative needles (e.g. Butterfly needle, bone marrow needle) with manual insertion, e.g. hand-twisted. Both techniques are used during neonatal resuscitation. The Arrow®EZ-IO® (Teleflex, Dublin, Ireland) is a reusable battery-powered semi-automatic drill that comes with single-use specialised sterile IO-needles to be attached to the drill

☆ A Spanish translated version of the abstract of this article appears as Appendix in the final online version at https://doi.org/10.1016/j.resuscitation.2018.04.003.⁎ Corresponding author.

Patient characteristic: Sixteen (8 female, 8 male) formaldehyde-fixed (10%) stillborns were investigated (median gestational age: 29.2weeks (IQR 27.2–38.4)). The investigation involved both legs. The needle for intraosseous access was manipulated manually (Butterfly needle and Arrow®EZ-IO® in- traosseous needle) and by means of an automated puncture system (Arrow®EZ- IO® intraosseous drill, Teleflex, Dublin, Ireland). The exclusive position of the needle in the bone marrow was regarded as successful placement (+). The diameter of the corticalis was determined from the CT images.

with different needle lengths.
There are only limited studies about IO-infusion access in newborn

patients [12,13] and mainly performed in patients more than one month of age [13–15]. Our study investigated the feasibility of per- forming intraosseous access in preterm and term stillborns using dif- ferent devices and techniques.

The cadavers used for the investigations were legal donations to the Centre of Anatomy, University of Cologne, Germany. After ethical committee approval (No: 16-408), sixteen (8 female, 8 male) for- maldehyde-fixed (10%) stillborns were investigated (median gesta- tional age: 29.2weeks (IQR 27.2–38.4); Table 1). There was no mor- phological malformation in the bodies investigated. The age of gestation of the cadavers was compared to the documented gestational age by measuring the length of the clavicle according to Sherer et al. [16].

Two different needles (a: Butterfly needle, B.Braun Venofix® Safety, 0,8 × 19 mm, 21G, colour green; b: EZ-IO® intraosseous needle PD 15G for 3–39 kg body weight with a maximum depth of 15 mm, colour pink, Teleflex Medical, Dublin, Ireland) were applied to a total of 16 pre- mature and term cadavers by an experienced investigator using a standard protocol. In detail, the tibial tuberosity was identified and approximately 15 mm distal and medial to the patella, the place of in- sertion was located. This location (Fig. 1) is in accordance with the official recommendation in placing IO-access in paediatric emergency care [2]. The investigation involved the tibial bone of both legs of each cadaver. The needle was first inserted manually (Butterfly needle or EZ- IO® intraosseous needle) and then by means of a battery-powered semi- automatic drill (Arrow®EZ-IO® intraosseous drill, Teleflex, Dublin, Ire- land). In total, the investigation was performed 15 times using Butterfly needle, 15 times manually using an EZ-IO® intraosseous needle and 16

times using a battery-powered semi-automatic drill (Arrow®EZ-IO®). Due to an amputation just below the knee joint having been performed on one cadaver (No.587), the attachment of the intraosseous needle could only be achieved by using a battery-powered semi-automatic drill (Arrow®EZ-IO®). The correct position of the needle within the bone marrow cavity was analysed by spectral-CT (Table 1, Fig. 2).

Spectral-CT examination (iQon®, Dual-layer Spectral-CT, PhilipsTM, The Netherland) were performed, row data were reconstructed using a soft kernel (soft tissue window) and an ultra hard kernel (bone window), saved in DICOM format and analysed on a clinical PACS workstation (IMPAX-EE® V.R20XVISU2, AGFA, Germany). In order to clarify the position of the intraosseous needle, 1 ml contrast medium (Imeron®, Fa.BraccoTM, Konstanz, Germany) was injected and the dis- tribution of the contrast agent was analysed whether there was contrast medium inside the bone marrow cavity (successful placement) or only outside the bone (unsuccessful placement, Fig. 3). Focus distance was kept constant in all investigations and positioned in order to reduce parallax to a minimum. Due to the special properties of iQon® Spectral- 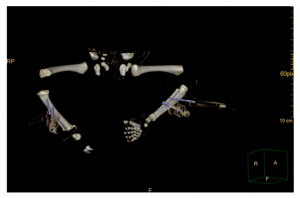 Fig. 3. Postmortem computed tomography (CT) of a stillborn term newborn, age 39+5 gestational weeks showing the false installation of intraosseous needle (here: Butterfly needle) on the tibia on both sides with extravasation of contrast medium outside the bone marrow cavity.

CT we were able not only to display the anatomy, but also use spectral iodine colour overlay to characterise the material content of critical structures. The diameters of the corticalis and of the medullary cavity were determined from the bone window CT images of each cadaver at the proximal tibia.

Successful hit rates with 95% confidence intervals (CI’s) and odds ratios between the three methods were estimated using a generalised linear mixed model (GLMM) to account for possible correlations be- tween results from right and left legs in the same child and possible effects of the diameter of the corticalis. The model tested leg effects within child effects using a logit link function to estimate successful hit. Child and child x leg intercepts were modelled as random effects; in- tercept, method and diameter of the corticalis as fixed effects. The non- significant model was retained in order to avoid underestimating CI widths.

The median diameter of the bone marrow cavity at the proximal tibia in all preparations investigated is 4.0 mm (IQR 3.3–4.7).

Although intraosseous lines have been successfully used since theirfirst description in 1943 [17], there are different results regarding safety, performance and proper functioning especially with respect to preterm and term neonates. Our results support the recommendation [2] that drugs are best given via a centrally positioned umbilical venous

catheter. By contrast, it was also demonstrated, that intraosseous access can be performed more quickly than UVC in a simulated delivery room setting [3]. As opposed to our observations, this study was not per- formed under real-size anatomical conditions and the experimental setting may have contributed to the high rate of successfully inserted EZ-IO® needles.

Regarding another observational study evaluating the use of in- traosseous line in primary neonatal resuscitation (mean gestational age: 32 weeks), it was also demonstrated, that only 4 out of 27 punctations had minor complications, and there were no failed attempts [12]. By contrast, all intraosseous needles in this setting were placed manually by direct screwing without semi-automatic devices using a bone marrow needle (18G).

We posit that the different observations, with respect to complica- tion rates and successful intraosseous placement, are the results of different techniques in intraosseous needle placement over the last decades. One might speculate that complication rates regarding IO-in- fusions during neonatal resuscitation arise with the introduction of semi-automatic IO-drill (e.g Arrow®EZ-IO®). In a retrospective analysis of IO-needle insertions using Arrow®EZ-IO® systems no significant dif- ferences in complication rates between children younger than 7 years and older patients were observed [18]. However, neonates were not analysed separately.

Regarding anatomical considerations, there are only limited studies with respect to neonatal tibial anatomy [19–21]. However, these stu- dies did not refer to the need of intraosseous access in this special group of patients. The contact area for bone needle insertion is narrow and limited. Moreover, correct intra-marrow positioning depends both on the angle of entry and the marrow cavity diameters. Rodriguez et al. demonstrated that the intramedullary diameter in preterm and term newborns varies between 1–2 mm at the midpoint of the tibia [20]. With respect to the 1.8 mm diameter of the stylet and Y-shaped needle (Arrow®EZ-IO®) and a median bone marrow cavity diameter of 4 mm at the proximal tibia, the correct position within the medullary cavity is hardly possible. It is equally important to take into account that the growth plate must not be injured. This is located 10 mm distal to the tibial tuberosity [21].

Moreover, the semi-automatic systems in battery-powered drilling devices must be halted when reaching the bone marrow cavity, after piercing the thin layer of the corticalis (Table 1, Fig. 2). However, the momentum of the bone drill itself cannot be influenced by the in- vestigator. Halting the needle drill within the cavity is essential in order not to penetrate the opposite cortex following dislodgment [8]. This fact may be one of the reasons for the rate of faulty placement in our investigation.

Our results may be limited by the small sample size, dictated by the type of study conducted, resulting in a wide divergence of estimated hit rates. This is most probably the major cause of failure to achieve a significant model, despite a sizeable odds ratio of 2.4 when comparing the Butterfly needle method with the needle drill (95% CI 0.8–7.6). The practical implementation of the study by a single examiner may also have influenced the results, but due to the small number of cases, we did not employ other examiners.

Our conclusion may also be limited by the postmortem analysis and the preparation of formalin-fixed stillborns, which led to changes in the composition of the organs [22]. The bone marrow aspiration test failed, but this is also very difficult or impossible in neonates.

In the majority of neonatal resuscitation, intravenous access can be obtained via peripheral or umbilical routes as recommended by the European Resuscitation Council (ERC) Guidelines 2015 [2]. If this procedure fails, intraosseous access in premature and neonatal infants can be achieved using a hand-twisted Butterfly needle (21 G). If this is not possible or practicable, an intraosseous needle (e.g. EZ-IO®) should

be screwed in manually.